As in the last years, I released a slightly updated version of the WebOS app for FOSDEM (Free and Open source Software Developers’ European Meeting). FOSDEM 2013 is taking place on February 2nd and 3rd in Brussels (Belgium). 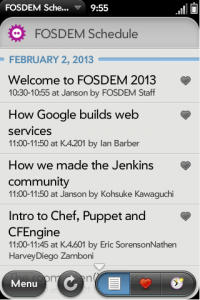 The new version of the FOSDEM WebOS app includes the new FOSDEM gear icon and smaller fixes. It allows you to download the schedule to your phone, mark favorite events, display maps and more. It can be downloaded from the HP App Catalog. You can find more information and the source code in this Redmine project, the source code is also mirrored on Github. You can also download the *.ipk package (exactly the same version like in the App Catalog).

The FOSDEM WebOS app is released as free software under GPL.

In addition to the WebOS app I also helped out with the Android app this year. I found out that the existing app didn’t work with the new schedule (because the URL moved from http to https). 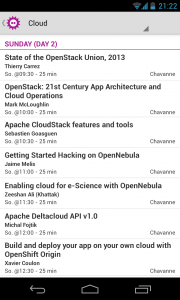 Also there wasn’t an update since ~2 years, so I decided to Holo-ify the user interface of the existing app and make it feel more like a modern Android app. The most recent code I found was the fork from Christopher Orr on Github, so I forked his code. I replaced the old logo with the gear icon, made use the new FOSDEM colors and added the Action Bar as important tool for navigating through the app. To provide backward compatibility with Android 2.x devices (who don’t ship with the Holo UI) I used the great ActionBarSherlock library.

The Android app is available in the Google Play Store where Michaël, one of the original creators, pushed my changes to. You can find the source code on Github (a mirror can be found in my Redmine project). You can also download the *.apk directly, although it was signed by me and therefore is not compatible (means upgradeable) with the Play Store version.

Links to all FOSDEM apps for multiple platforms are listed on the FOSDEM website.