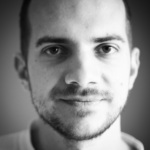 Raphael Kallensee is a software developer living and working in Mannheim, Germany. Raised in Gotha (Thuringia), after school and one year of civilian service he started a two-year interlude at the Technical University Dresden (Saxony) before moving to Mannheim (Baden-Württemberg) for an apprenticeship as a software developer at trio-interactive it services GmbH, where he still works. He is proud co-organizer of the Webmontag Metropolregion Rhein-Neckar and sometimes doing part-time freelance work.

He's GNU/Linux (currently Ubuntu) user and believes that Free and Open Source Software is the right way to go, both for the freedom of the users as well as innovation in the world of software.

I was always fascinated by computer networks. After the first online services like BTX popped up in Germany, I tried to connect to them with my beloved Commodore 64. Soon the possibilities became too limited and I used my fathers' Atari TT and started to discover Bulletin Board Systems, especially I was active in the MausNet (German). As soon as the internet became available I spent many nights (and a lot of money - Internet access was expensive in these days - I'm sorry, mum and dad!) in the early World Wide Web. Soon I started to build web pages and after I found out that Netscape Composer didn't produce maintainable markup I started to dive into HTML 4.

Mobile communication was also a thing that fascinated me early. After experimenting with pagers (e.g. Quix, German) I was the first at school who owned a cell phone (I started with a heavy Sony CM-DX 1000). My first mobile development excursion was building a WAP/WML version of my site at the end of the last millennium. After a few "Hello world" applications on my earlier Symbian/S60 phones I really started to develop apps for (the now more-or-less dead) WebOS (e.g. an app for the FOSDEM conference). Later I did an Android project at work and after switching to Android sometimes I also enjoy developing Android apps (like helping out with the FOSDEM app for 2013).

This website has many ancestors. Started at the end of the 20th century on a webspace on home.t-online.de featuring some vintage GIF animations and moved through the ages with various domains, webhosters and engines (static pages, semi-static PHP salad, b2/cafelog, b2evolution, WordPress) I'm aiming to move to a Ruby-based static site generator called nanoc, partly because I'm currently doing a lot more WordPress updates and spam moderation than actually writing blog posts. A responsive layout is still an open task.

This website was created using Free Software on a GNU/Linux system, e.g. with GIMP, gedit and Mozilla Firefox.

The (virtual) webserver is a GNU/Linux system. Apache is serving the static files generated by the Ruby-based static site generator nanoc. The server is provided by TwooIT (Aachen, Germany).

The Microformat icons were created by Wolfgang Bartelme (microformats.org, CC-BY-SA). The social media icons are from Paul Robert Lloyd (CC-BY-SA).

Even though I'm not a professional designer I made the current layout by myself.